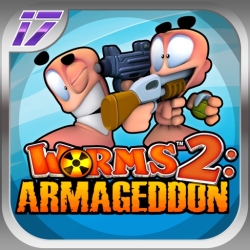 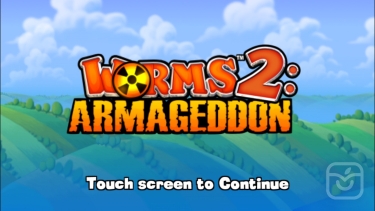 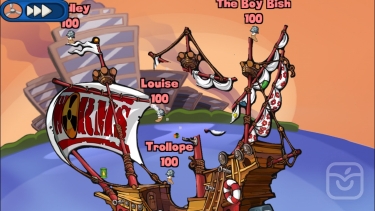 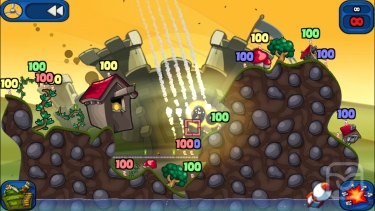 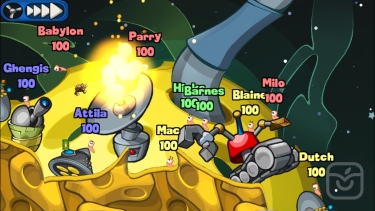 Play up to 16 simultaneous games with your friends or use Game Center’s auto-match facility to find new opponents.

Grab your grenades and prepare for battle, as the worms are back, bigger and better than ever in Worms™2: Armageddon! The best-selling turn-based-strategy blast-a-thon is back on the App Store for iPhone and iPad with new weapons, brand new customization options and of course, more explosions! Get ready for the ultimate installment! With many games modes available, there is something for everyone. Battle against 3 other friends in high-octane multi-player action or take on the solo campaign in a bid to become the ultimate mercenary worm!

THE WORMS ARE BACK!

Body Count Mode: The player takes on endless waves of increasingly tough enemies across 5 different themes or a random landscape.

Practice Mode: A mode where the player can practice with every weapon against A.I. dummy worms.

Battle against your friends with offline Bluetooth multi-player action for 1-4 players.

Take on all-comers from around the globe with online Wi-Fi multi-player action for 1-2 players.

The return of the favourite game styles - ‘Bazooka and Grenade’, Melee, Gun Show, Heads Up, Lightside, Darkside and Sudden Death.

Master the variety of difficulty settings – Beginner, Intermediate and Pro.

NEW – in-depth ability to make custom game styles so players can create whichever game style they want to and play with online or offline.

NEW - spend gold earned by completing the Campaign missions in the Worms™ shop on new hats, forts, and gravestones or unlock weapons for multi-player games.

NEW - customize even further with one of the iPhone exclusive bonus hats.

Further personalization of worm and team names, speech-banks and gravestones.

Save game status on quit – automatic save to the last turn if you exit - great for longer battles and for saving your single-player progress.

Flip the screen! Great for ‘coffee-table’ style play given the support of the screen orientation feature.

Worms™ for iPhone and Worms™ HD for iPad.

NOTE: Please ensure you & your friends are running the latest version of the game when playing online multiplayer.