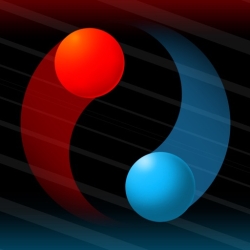 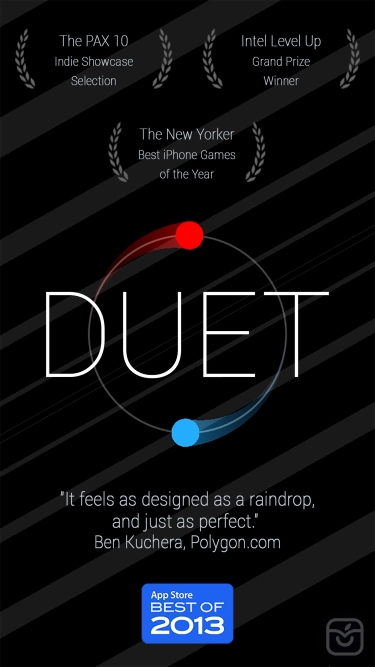 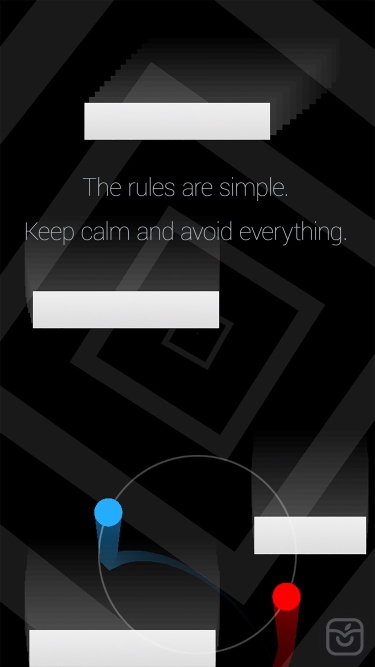 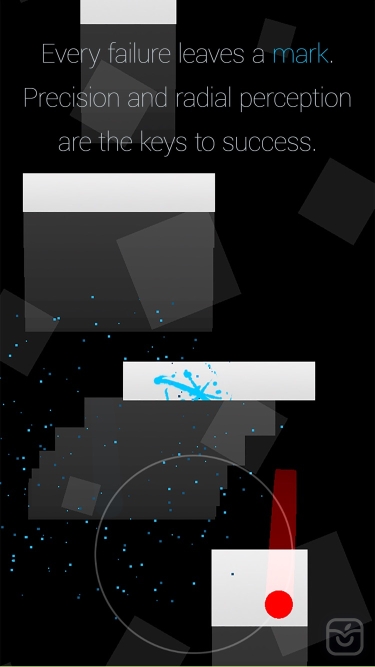 Enter a mesmerising trance of co-dependence in Duet. The rules are simple: control two vessels in sync, survive against all odds and keep calm.

Best, Most Elegant iPhone Games of the Year 2013 - The New Yorker

"...few other games are as fun when you succeed." -- The New Yorker

"It feels as designed as a raindrop, and just as perfect." -- Ben Kuchera, Polygon

"Duet does what the best video games do." -- Kotaku

"Duet looks hard as nails. And I love it." -- Touch Arcade

"Shiel's soundtrack ... is as innovative as the game it scores." -- Jake Cleland, The Vine

"Your eyes, ears, and thumbs were built to perform this Duet together." -- Indie Games

"...Duet's plaintive and melancholic aesthetic imbues it with a sense of the profound." -- CVG

"But while the aesthetic of Duet is familiar, the gameplay is all new." -- Pocket Gamer

Your survival is dependent on protecting two vessels - they are devices in sync, a dance and song between two entities tethered together in symbiosis. Feel edge of your seat terror where the world around you becomes quiet and numb as all that matters is the game living between your palms -- that is Duet.

Experience nine chapters of deceptive narrative and nerve-twisting gameplay. Unlock the bonus Survival chapter for endless score chasing delight. Replay any stage to perfect your movements and unlock over 25 Game Center achievements. This is a game that will test you.

Explore a whole new narrative with all-new game mechanics in our new “epilogue” to Duet. Including over 40 new stages, new narrative and new remix tracks. You will need a new state of mind to complete this experience.

With air tight controls and gameplay that’s tuned to perfection Duet provides the perfect balance between challenge and pure gaming satisfaction. Touch either side of the screen to twist your vessels and avoid everything in your path. Remember: even that which begins simple can end complex.

An outstanding handcrafted soundtrack by Melbourne composer and Gotye multi-instrumentalist Tim Shiel. Nine unique and mesmerizingly beautiful compositions ensure an immersive experience for you at every step of your journey, complemented by full in-game vocal narration by Jojo Petrina.

- Full iCloud support - sync your progress across all your devices.

- Compete with Game Center on the leaderboards.

Selected for the Indie Showcase at PAX Aus and a finalist in both Game Design and Audio for the Freeplay Festival. This is another award-winning title from the team behind Time Surfer & Bean’s Quest. We call Duet a “Hex-like” in honour of Terry Cavanagh’s contribution to the medium of games and exploration of genres.

Tim Shiel is a composer/producer based in Melbourne. Tim is known to some as Faux Pas, the moniker under which he released a steady stream of constantly shifting electronic music for many years. He is also known for his work as a broadcaster at Melbourne independent radio station 3RRR FM, and for his recent role as multi-instrumentalist in Gotye's live band.